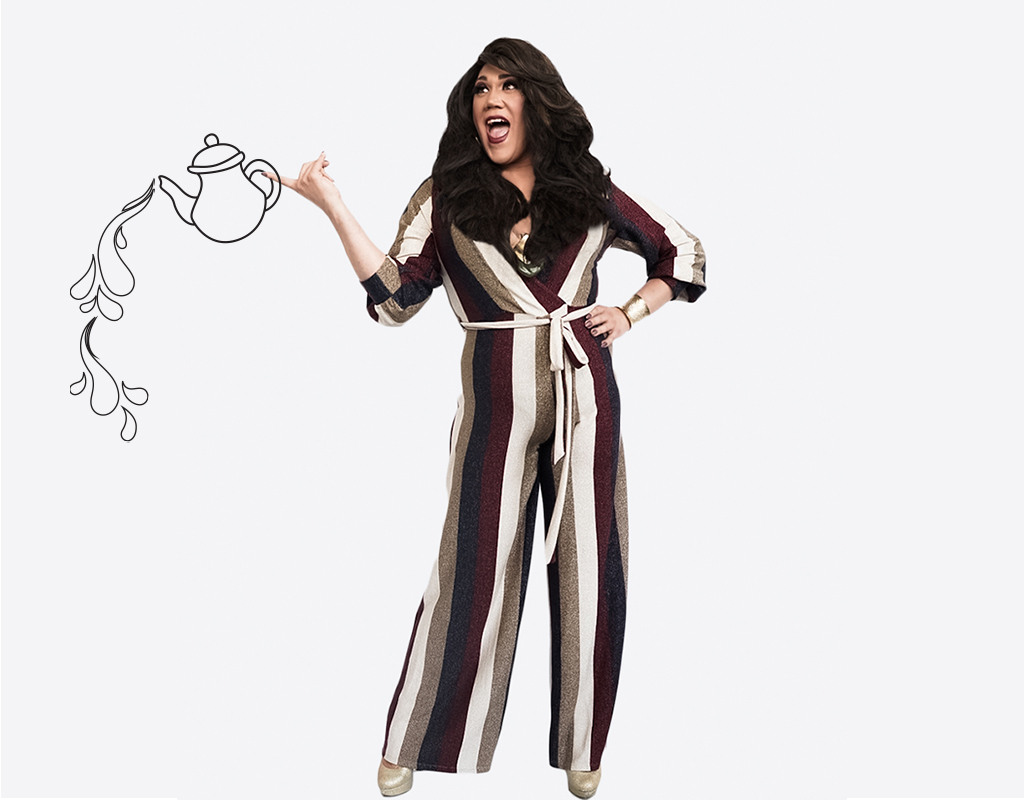 The Queen FINALE spills the tea!

So by now the words out that you are our resident Queen available for private parties and the never-been-done in Nashville experience “Shop with a Queen,” but for those who don’t know you let’s give ‘em a lil’ intro:

When did Kennedy Ann first come to life?

Wow! When did she first come to life?! Hmm, I will start by saying... she keeps growing and keeps coming to life... I would say drag came to mind when I was a young age. I had seen Rupaul on TV in the 90’s and my cousin told me, “That’s a man!” And in my mind, I was like “Wow that is amazing!” I knew that it was something I wanted to do, but didn’t know how I would go about it! I would say my drag persona came to me at 17. I just started playing in makeup and dressing up in my friend’s clothes. What they thought was just me being silly, was really me testing the waters in something I wanted to pursue.

How long have you been doing drag?

Since I was 17. So, about 15 years now. I’ve had a residency at the Lipstick Lounge in East Nashville for 6 years. I have been doing shows there for 8 years.

Do you feel more comfortable in drag?

Do your parents support your side gig?

I think they support me as much as they can. I know my mom has come to one performance. She does live 4.5 hours away, but also it’s not really her cup of tea. She does comment on photos with her signature “Lookin’ good!” Haha, I’ll take what I can get. My dad and I haven’t really ever talked about it. He knows I do drag, but again I come from a conservative religious family. These things are not necessarily their scene.

What is your favorite thing about performing?

My favorite thing about drag are all the different aspects, but my all-time favorite thing is interacting with the crowd or audience. Getting someone to smile, laugh and forget about their problems for 2hrs or more. Kennedy Ann was a safe haven for me years ago when I was a younger and she helped me navigate the rough and tough world of being gay in rural Missouri and now living in the South. That’s the gift I want to give my audience. I want them to feel confident, comfortable and happy... we are going through life together and it’s hard! If Kennedy Ann can help relieve some stress or life’s problems for only a fraction of the time, that’s a win for me!

What is one thing no one knows or understands about drag queens?

No one really knows that we spend so much time preparing to put on a show for people! This isn’t just a wake up and “I think I’ll do this today kind of thing.” It takes creativity and planning (at least for me). I want people to know that I really care if they are enjoying themselves. I really work hard to have a message in my songs and to have my audience laughing and having fun and feeling my performance. I think people don’t realize how much pressure queens put on themselves. Again, I can only speak for myself, but that’s my stance. Also, understand that we are not a thing. We are people. Don’t just come up and touch us. Don’t touch my boobs, ask me first! Understand that when I am performing don’t come up to the stage and act like it’s solely your show. I am preforming for you AND the entire audience. That’s my job. If you love the song and you’re living your best life, I am so thrilled! However, move so people can tip and everyone can enjoy the show.

How long does it take you to get ready?

On average it takes me about 2-2.5 hours to get ready. That’s paint time, padding/corset, hair and getting dressed. If I am in a hurry I can paint a face in 45 minutes. Now honey, that’s not my favorite situation because you gotta give a girl some time, but it can be done!

If not twirling around at a private event for the store, where else can someone catch Kennedy Ann performing?

You can always catch me in my living room doing at least 2 shows a night, but I’m not telling you where I live…

In what ways are Ben and Kennedy Ann alike?

In what ways are you vastly different?

We are vastly different because Kennedy Ann doesn’t care if she offends someone! By that I mean, everyone doesn’t need to take themselves so seriously! If you can’t laugh at yourself then you’re not living right. She will tell it like it is. Ben is more quiet and reserved, but sometimes situations I see Kennedy Ann coming out of Ben! Kennedy Ann will also cuss like a sailor! Ben doesn’t really cuss and it’s funny to see that change.

What quality do you wish Ben had that Kennedy Ann has?

Kennedy Ann definitely gives Ben so much strength. In general though, I think they share all qualities and play off each other well.

How hard are bathroom breaks?

You don’t take a break! Once I am suited up, I am in it to win it! I will say I do shots so I don’t have to go to the restroom... when you drink those mixed drinks the extras cut through you! I just get tipsy, plus I am not a big drinker. Unless it’s an emergency where I would need someone to cut me out of my pads and duct tape, I’m not using the restroom. Haha!

What is your most embarrassing story performing?

Oh, lord! My first time performing in Nashville will always be my big entrance to the scene here! I was at Play, performing for the HotMess Charity Drag show. It was my first time preforming since I had moved to Nashville. I was ready to introduce Nashville to Ms. Kennedy Ann Scott. Well, they got introduced alright! Ha! Before I was going on stage, like right before I walked out for my number, I felt a snap! I was like, “Oh! Dear! Here we go!” I was out on stage and living my best life. When I went down into a sexy pose, some of my man parts popped out of my hot pants! Hunty everyone was introduced to me! I went down again and there they were right in a woman’s face! I tried to play it off, but she wasn’t having it! Life happened and we went with it! She is probably still scarred to this day, my apologies.

If anything it’s taught me patience. Waiting for the right time! It’s allowed me to be more creative and work on more ideas I have for shows! It’s taught me how to be ready to support people when we do return to a “normal.”

What actress would Play Kennedy Ann in a movie?

Ooooo! I really need to think about this! I would love for it to be Tiffani Amber Thiessen! I mean I always wanted to be Kelly Kapowski, so why wouldn’t she want to be me?! Ha!

Do you have a go-to song that just gets you excited to perform no matter how many times you’ve done it?

My go-to song?!? I would say that it would be Shake It Out by Florence and the Machine. It’s a powerful song for me! I just love the emotion and if there is anything Kennedy Ann loves it is drama and emotion! I love to evoke an emotion in my audience! I mean I want to be like a Lifetime movie and get these people to really feel something! Ha!

What is the enemy of drag?

A conservative boob! A person who is just is so uncomfortable with themselves that they can’t help but hate on people who are!

What character on sex in the city would Kennedy Ann Kiki with?

I am totally a Charlotte, but would totally party with Samantha!!!!

What has drag taught you?

To love myself more! To not take people’s shit! To be ok with me and know that it’s all going to work out!

What do you hope to give or teach the audience after watching you perform?

Live your life! Don’t judge others, it’s a waste of time and no one has time for petty BS. I want them to loosen up and have fun with life! Don’t take things so serious, because no one gets out of the life alive. Enjoy the journey!

If this is the finale, what’s your FINALE thought?

Definitely some rules to follow at a Drag Show:

1. Don’t touch the queens. A queen can touch you, but you have to be invited to touch a queen.

3. Our gender is our business

5. Don’t just stand in front of stage and block people.

No need to RSVP, We’ll be here.